Aside from author events, this page is intended to encourge you to use reusable shopping bags, to think abuot shopping local when feeding your chickens and to encourage you to use your public library. 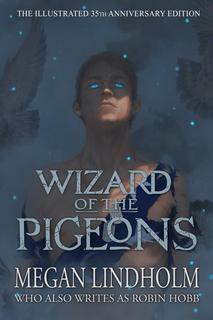 SEATTLE, WA, May 22 -  From Grim Oak Press, the illustrated edition of Wizard of the Pigeons,  is available for preorder today from your favorite bookseller. It will feature original illustrations by Hugo Award finalist Tommy Arnold.

The illustrated editions will publish December 1, 2020. A portion of the proceeds will go to the National Veteran's Foundation.

The wide release hardcover and e-book edition is available for pre-order today, from your favourite bookseller. Signed copies of the wide-release will be available on The Signed Page on June 1st.

The limited and lettered editions of Wizard of the Pigeons will be available for pre-order on June 1st at 10:00am PT, to publish December 1st.

More details, including information on ordering signed editions, can be found by visiting Grim Oak Press.

WIZARD OF THE PIGEONS, by Megan Lindholm.  Not all who wander are lost...and not all who are homeless are without a home. For Wizard, his home is Seattle. He lives his life on the edge: the edge of forgetting and remembering, the edge of being noticed or ignored, the edge of being someone... or no one at all. But when an unseen force begins to threaten Seattle, a force that seems have terrible roots tangled in Wizard's forgotten and painful past, he knows that he is the only Wizard in Seattle who can face the evil and save himself.

"Little was known of his past, but atoning for this lack was a plentitude of rumors about it. Some said he'd been an engineer and a warrior who had returned from some far off battle with memories too fearsome to tolerate. And some said, no, that he had been a scholar and among those who had refused to go to that far strife, and that was why he dwelt nameless and homeless in the streets."