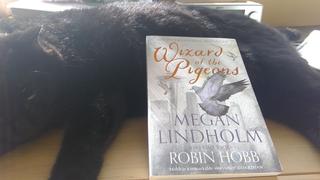 This is not a cat with a book leaned on him.  This is Little Black Dog, who likes to insert himself into anything I am attempting to do.  At least this is less messy than trying to make waffles with his assistance. 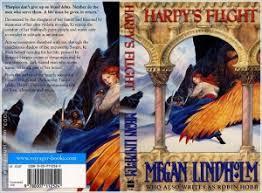 In 1983, Megan Lindholm published her first novel. Harpy's Flight was the tale of a roving teamster, who had recently experienced the terrible loss of her family.  It was a novel of revenge, and renewd interest in life, and a bit of romance with an unexpected companion.

It was the first of nine solo novels written and published over the next nine years. She also sold short stories to the major sf/fantasy magazines of that time.  Her novels were nominated for the Nebulat award.  Her short stories were finalists for both the Nebula and the Hugo.  "A Touch of Lavender" won the Asimov's Reader Award. Gardner Dozois often chose her short stories to reprint in his anthologies.  It would seem she was at the beginning of a promising career.

But while reviews were good, including a few starred reviews in Publishers Weekly, and the readers who read her stories were enthused, actual sales were umimpressive. So Megan Lindholm made a decision.  She stepped sideways in the genre, became Robin Hobb, and claimed popular success with The Farseer Trilogy and the sequels that followed it.

But what became of those nine books by Lindholm.  In the US, they fell out of print. The can now be found only by searching for used books on line or chancing upon them in the second hand book store or the library.

But that was only in the US.

In the UK, in France, in Germany and in the Netherlands, the books remained in print much longer.  Even to today!

So while US readers may have to go on a bit of a treasure hunt to discover them, in the United Kingdom, Wizard of the Pigeons has recently been reissued with a brand new cover with art by Jackie Morris. First published in 1986, Wizard of the Pigeons is an urban fantasy set in Seattle.  It dealt with homelessness, vetarans of an unpopular war, PTSD, and the struggle to fit into a world that seems to have no place for you.

And, of course, magic.  And pigeons.

It's a bit sad to say that those issues still confront Seattle today.

Yes.  Including the magic.

I am forever indebted to my UK publisher, Harper Voyager, for continuing to believe in the Lindholm books, and for reissuing them with gorgeous covers by remarkable artists. 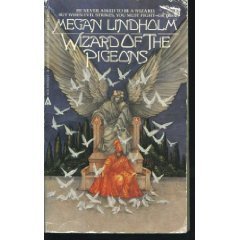 Original UK cover art for Wizard of the Pigeons

Wizard of the Pigeons, an urban fantasy set in Seattle, is long out of print in the US but remains available in the UK or in French in France.  It tells the story of a Vietnam Era veteran with PTSD who is homeless on the streets of Seattle in the years followoing the war's end.  Befriended by the enigmatic Cassie and the recalcitrant Rasputin, Wizard learns the ways of the street to survive, and more reluctantly, the ways of the magic that will not be ignored.

Evelyn is in a difficult place in her life. She's not living where she wants to be, and her husband's family is not welcoming. Is it nostalgia or madness when her childhood imaginary playmate begins to once more appear in her life?

The Inheritance is a collection of works by both Megan Lindholm and Robin Hobb.  If you've enjoyed the Hobb stories, this book gives you a chance to discover a few new ones, and sample the work of Megan Lindholm at the same time.

Novels - Out of Print in the United States