Wizard of the Pigeons; revisiting an old friend 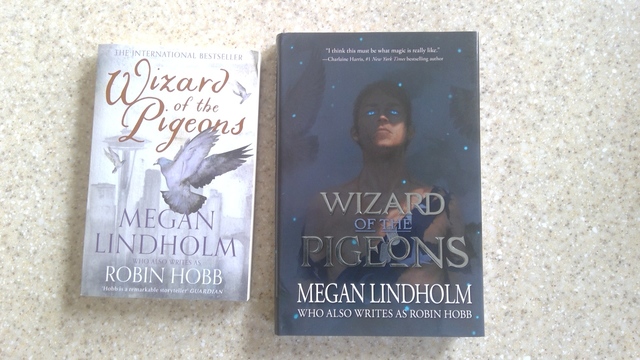 Wizard of the Pigeons.  US cover art by Tommy Arnold on the right, from Grim Oak.  The UK edition from Voyager is on the left.

To do the research for the urban fantasy set it Seattle, I made multiple trips to the city.  I took the Underground Tour, wandered through Pikes Place Market, visited the waterfront and made notes on bars and coffee shops around Pioneer Square.  I wrote about what I saw.  I saw sleeping bags tucked up under the scanty shelter of freeway overpasses.  I saw men sleeping on the park benches in Pioneer Square, resting while they safely could in daylight and standing in line outside the Union Gospel Mission, hoping for a meal.  My husband was engineer on a fishing vessel at that time.  When he was in port, he could visit certain underpasses or locations where homeless men were eager to be hired or a few hours or a few days to help prepare a vessel to depart for the fishing grounds.  Some were chronic drunks.  Some used drugs.  Others were simply 'down on their luck.'  Many of them were veterans.

All were human beings.

My protagonist, Wizard, was a Viet Nam veteran trying to cope with a reality that no longer included him.  Homeless, he lived in the abandoned upper story of a building, among the pigeons that sheltered there at night.  When the reader first encounters him, he is scavenging a meal, and then barely suriving a cold and rainy Seattle night. As the story unfolds, he discovers others like himself; others who have been changed by hardship and trauma, hardened like iron in the fire, to emerge as something more than what they were.  Wizards.  Protectors of the city where they live as outcasts.

Some of the city of Seattle of that story is still there.  The King Dome is gone, replaced by a new arena.  The Alaska Way Viaduct has been taken down after substantial earthquake damage and flaws were discovered in it.  But much of the setting of my story remains.  The Old Curiosity Shoppe, the Pike Place Market, Union Station, and Pioneer Square are stil much as they were 36 years ago.  As are the homeless people who call those public places in Seattle 'home.'

In 2020, Grim Oak Press brought out a new edition of Wizard of the Pigeons.  It is lovingly and lavishly illustrated by Tommy Arnold. I am very pleased to see it once more in print and availabe in the US.  Copies of the hardback can be ordered directly from Grim Oak Press or from Amazon .  The UK edition of Wizard of the Pigeons is easily available through bookstores there or from Amazon.co.uk.

I love all your other works as Robin Hobb, thanks for posting this! I saw in another post what inspired the title and having two little children of my own I keep remembering the story and thought I should read the book. Went to go buy the Audio book of this and didn't seem to be able to find one, I guess it was never created? Perhaps I'll have to try my wife's kindle read function!